Did you know that some of the best islands are just a breath away from Athens?

You don’t have to travel for long hours to spend your holidays on a beautiful Greek island!

Either you’re searching for an unspoiled island off the beaten tourist trail, or for a cosmopolitan destination, there’s plenty of option just 2 hours from Athens.

So, keep reading to discover not 1, not two but 10 stunning Greek islands within 2 hours from Athens! If you’re searching for an island REALLY close to Athens, then your best bet lies in Poros!

Either as a part of a tour or as a holiday destination, Poros is a top choice in many aspects.

Sitting in the heart of the Saronic Gulf, Poros has long been a popular destination among the Greeks for weekend getaways from the capital. Thanks to its natural beauty, picturesque port, and elegant beaches, Poros emits a vintage aura. Stroll along the seafront promenade, eat fresh fish and seafood at traditional taverns, take a dip in the crystal clear waters of the Aegean, marvel at all-encompassing views of Galatas… Holidays in Poros is the ultimate relaxing experience! Foodies of the world, rejoice!

Sifnos is hands down the yummiest Greek island!

Long famed for its gastronomy, Sifnos island attracts thousands of visitors every year. So, if you are a foodie, don’t miss the chance to visit this Cycladic stunner. Mouthwatering local recipes, such as slow-cooking stews, peas balls, and capper salad will make you never want to leave this island.

But, gorging on the local dishes is not the only thing to do in Sifnos.

Sifnos has breathtaking scenery! It is full of rocky mountains and dotted with traditional whitewashed houses and dovecotes scattered all around the island. As for the beaches, they are the standouts of Sifnos. From shingle beaches with shiny pebbles to sandy beaches with glittery sand, there’s an ideal beach for every traveler! Spetses is the cosmopolitan getaway you’ve been looking for!

Less than 2 hours away from Athens, Spetses is one of the most famous islands near the Greek capital. Its proximity to the rest of the Saronic islands makes Spetses a good base for island hopping in the Saronic Gulf!

Immediately upon arriving in Spetses, you’ll realize that this island oozes vintage charm. Full of elegant mansions, amazing hotels, and narrow alleys, it emits a cosmopolitan aura. Oh, and did we mention the car ban? You’ll only see bicycles and carriages moving on the roads of Spetses! This, of course, makes Spetses a go-to destination for peaceful holidays away from the hustle and bustle. Andros is an island well-known to the Greeks, thanks to its proximity to Athens and its natural beauty. In fact, Andros is the greenest island of the Cyclades. Carpeted with lush vegetation, Andros is the ultimate destination for nature lovers. Hiking is unsurprisingly a popular activity to do in Andros, as many hiking paths cross the island!

Except for its natural beauty, though Andros stands out for its cosmopolitan charm. The island’s capital, Chora Andros, is full of elegant mansions and neoclassical buildings that will make you feel transported to another era. Seriously, the architecture of Andros will make you fall even deeper in love with this island!

And don’t get us started with the beaches! From cosmopolitan to isolated and from organized to unspoiled, the beaches of Andros cover all the tastes. They do have one thing in common, though: they all have beautiful settings! Aegina is a beautiful island just a breath away from Athens. Its proximity to the Greek capital has made Aegina a popular destination for weekend getaways! Also, this cute island is an essential part of a Saronic cruise, as it is close to other Saronic islands, such as Agistri, Spetses, and Poros. So, if you want to live the ultimate Saronic experience, we recommend you do a tour around these little islands!

Aegina might tiny, but it has all that you could possibly ask of a Greek island. From stunning beaches to archaeological monuments, Aegina has a lot to offer to those willing to explore it. Especially the ancient Greek Temple of Athena Aphaia is a must-visit monument! Syros is hands down one of the most cosmopolitan islands of the Cyclades! Immediately upon arriving in Syros, you’ll realize that this island still lives in the past. The elegant mansions, catholic and orthodox churches, neoclassical buildings, and narrow alleys emit a vintage aura that never fails to charm the visitors!

Ermoupolis, the island’s capital, is considered one of the most beautiful capitals of the Cyclades. This beautiful town is hands down an architectural wonder! From the Town Hall, which was designed by the famous Saxon architect Ernst Ziller, to the Apollo Theater, which resembles La Scala of Milano, Ermoupolis has a lot to offer in terms of sightseeing.

To discover all the hidden secrets of Syros, meander through its narrow alleys and let it seduce you! Hydra is, without doubt, the most cosmopolitan island of the Saronic island chain!

Long a popular destination for the international jet-set, Hydra oozes a discreet retro charm. Maybe it’s due to its mesmerizing atmosphere that it was chosen as a filming location for movies such as “A girl in black” and “The boy on a dolphin”, starring Sophia Loren.

Hydra is an ideal destination not only for those who want to have a taste of its vintage glamour but also for those who seek to relax away from the hustle and bustle. Given that the cars are banned on the island, you’ll feel worlds away from city life.

Trust us, it’ll be hard to leave! Kythnos is a hidden gem in the heart of the Aegean!

Sitting on the west part of the Cyclades, Kythnos has made a name for itself as a top destination for quick getaways, as well as for island weddings. What’s more, due to its position, Kythnos is a good base for island hopping to the nearby islands of Kea, Serifos, and Sifnos.

The coastline of Kythnos is fringed with beautiful coves, where you can find some of the best beaches in Greece! Especially Kolona beach, which is basically a thin strip of sand forming two equally beautiful sandy beaches, is one of the most impressive beaches you’ll ever see!

But, there’s another reason why Kythnos is a popular destination: its thermal springs. Flowing in Loutra beach, these springs are rich in iron and sulfur, known for their healing properties. Don’t miss to visit them and treat yourself with a free spa treatment! If you’re searching for a destination off the beaten tourist trail just a short ferry ride away from Athens, then your best bet lies in Kea. Still untouched by mass visitors, Kea is the ultimate relaxing getaway for those who want to find peace from their hectic everyday life.

Just an hour away from Lavrio port in Athens, Kea is one of the hidden gems of the Aegean. Although it is a Cycladic island, Kea doesn’t have the typical Cycladic landscape and architecture. Instead of the whitewashed houses of the Cyclades, Kea is full of elegant buildings in earthy tones, which create a beautiful setting.

Kea also has a lot to offer in terms of sightseeing! On the island, you’ll find not one, not two, but four ancient cities: Ioulis, Korissia, Poiessa, and Karthaia. If you are a history buff, you’ll instantly fall in love with this island! Agistri is a tiny island that belongs to the Argosaronic island chain. Its proximity to Athens and its unspoiled natural beauty has made it one of the most popular destinations for weekend getaways!

This island is carpeted with lush vegetation and has a selection of secluded beaches. Its unspoiled natural setting makes it an ideal destination for camping! So, if your feet are getting itchy to go on an adventure but you don’t want to waste time traveling, Agistri is your best bet.

But, there’s a lot more to do here than camping! Explore traditional villages, dip in the pool-like waters of Aponisos, taste yummy fish and seafood at the local taverns, visit charming chapels… There are lots of amazing things to do in Agistri, but we think it’s better to stop here.

So, you don’t have to travel for long hours to get to some of the most beautiful Greek islands! There are hidden gems just a couple of hours from Athens.

Bottom line: Thanks to their close distance from each other, the Greek islands close to Athens are perfect for island hopping! 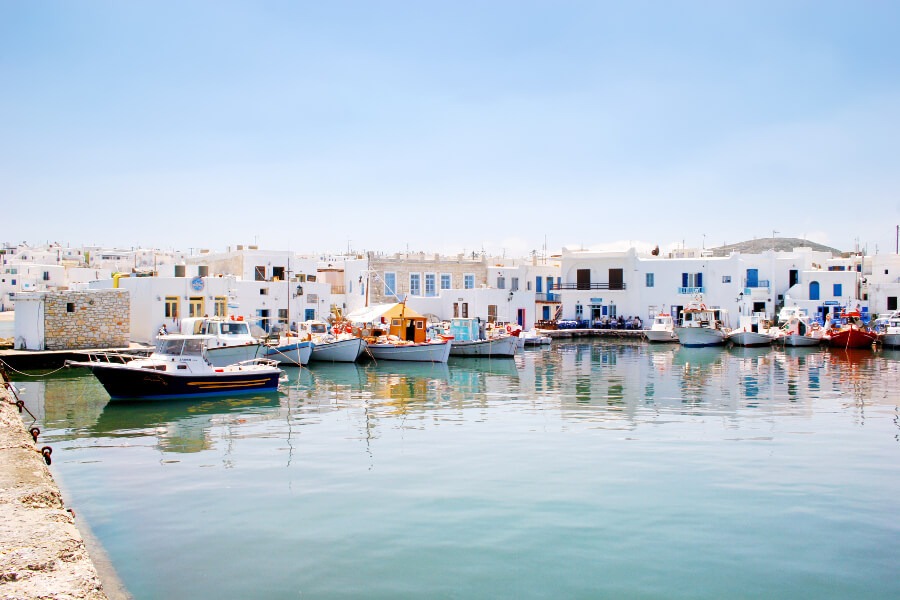 6+1 cool reasons why Paros is the ultimate isla...

Fact: Paros is shaping up to be one of the hottest destinations of the Cyclades. Honestly,... 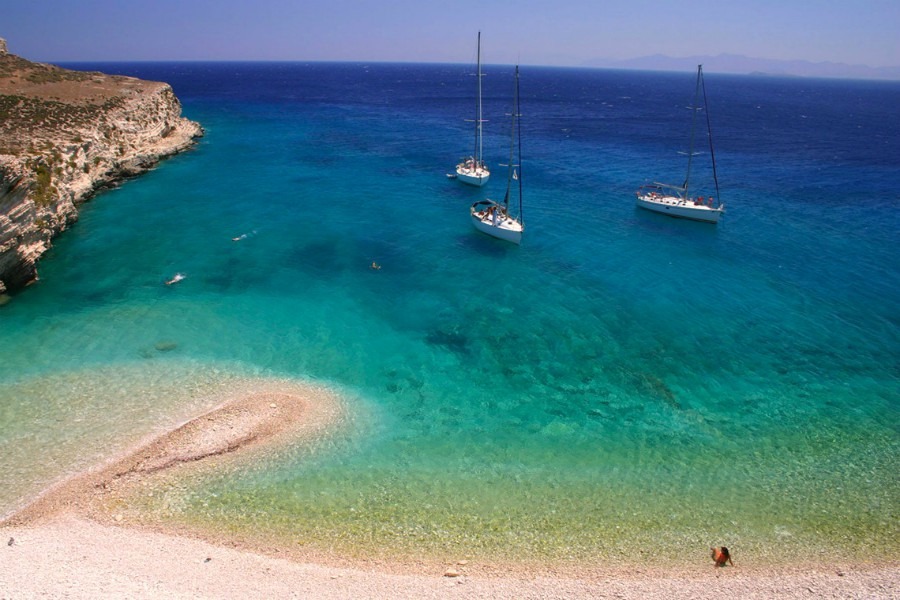 Island hopping from Mykonos. You should try this!

Mykonos may be the top destination in Greece. But did you ever think that Mykonos is... 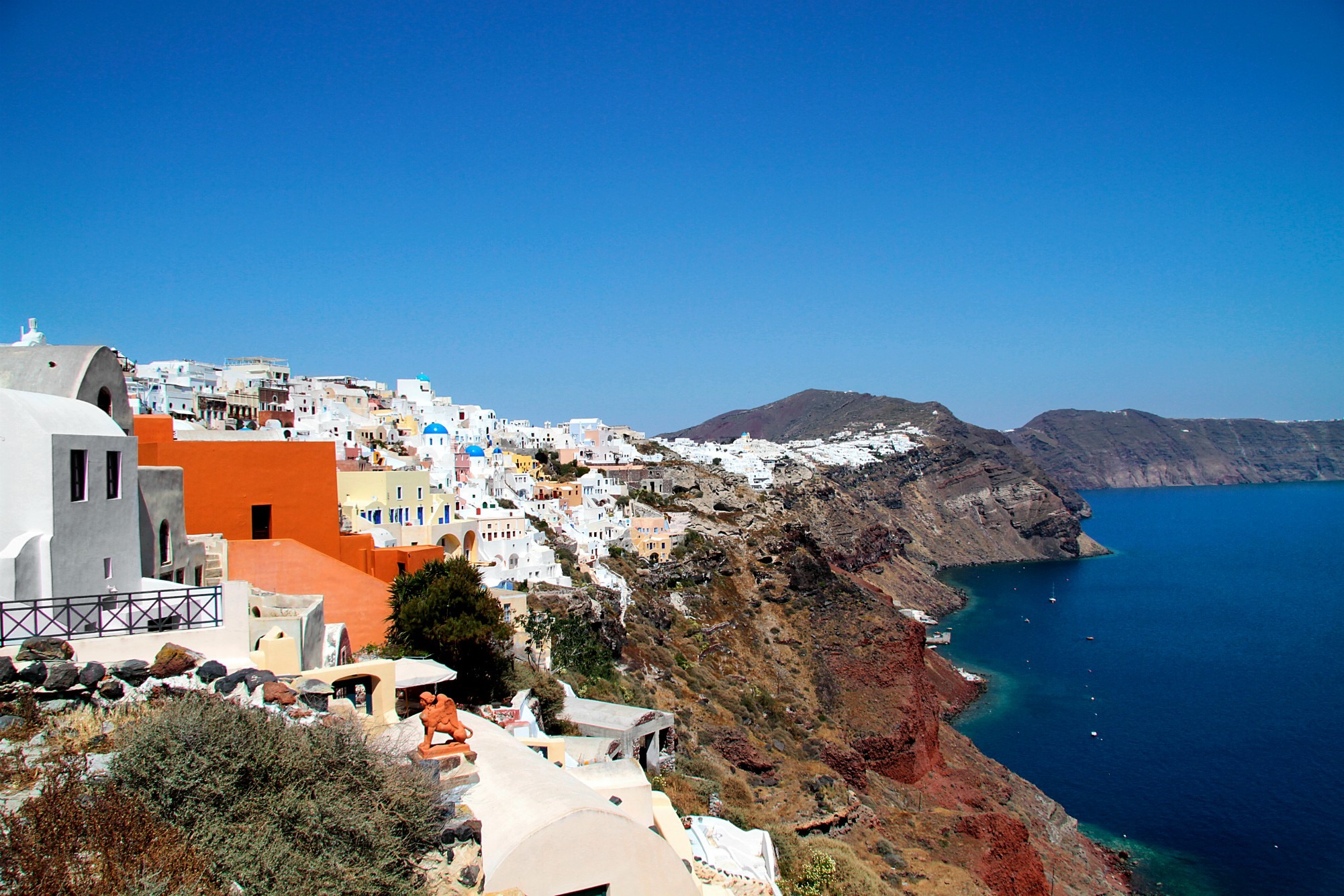 Fact: Santorini is famous for its beautiful landscape, volcano, dramatic caldera, and luxurious hotels. But, there’s...